Making a Pilgrimage, Day 1 to the Borderlands

In mid-April, twenty-six of us boarded a plane leaving from Newark airport in order to begin a pilgrimage that would eventually carry us into Rio Bravo, Mexico.  Led by Rev. Brenda Ehlers of Morrow Memorial Methodist Church in Maplewood, NJ we were a mixture of Unitarian Universalists, Methodists, at least one Quaker, adults, youth, teachers, pastors and students.  Early in the morning we rose, not having all met until we were aboard that plane en route to Austin, Texas. 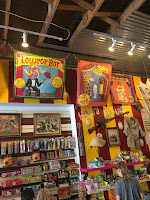 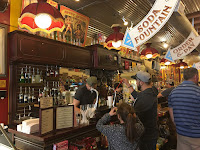 In Austin, we found somewhat warmer temperatures, food trucks, antiques, art, and classic cars (we were there during a car show).  Pastor Brenda warned us that you cannot take a pilgrimage expecting to return the same person.  In a pilgrimage, you are somehow changed by what you experience.  That night, sleeping on an air mattress on the floor of First UMC, Austin, I wondered if that was really true.  I knew a fair bit about immigration.  I traveled in Latin America.  I experienced much of Texas before this trip.  I heard the pilgrimage line before and I had made quite a few pilgrimages.  I felt the familiar resistance rising within me.  What was really going to change me in six days? 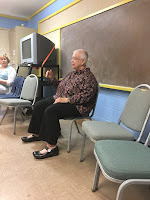 I forgot it was Palm Sunday.  It's not a religious observance central to my faith, but I recognized it right away as we walked into the church.  It's a familiar story to me nonetheless- the one of Jesus being greeted with fanfare like a king only to be crucified days later.  It's always been a reminder of how fickle a mob can be, and how difficult it is to be a prophet to your own people.  We moved on from one faith community to another, the second being Unitarian Universalist.  Aside from the Sundays that I've led services, it was the highest number of services I've attended as a congregant in one day!  At the UU congregation, we met with Susan Yarbrough, a former immigration judge who is now a candidate for ministry.  I marveled at Susan's ability to hold a variety of perspectives and experiences at once.  She both demonstrated compassion with a grasp of facts and details from people she had met decades ago.  At the same time, her position on matters would not easily fit the liberal idols of sainthood.  And yet, in the nuance, she shared stories where we found common agreement.  As she shared the story of one person she granted asylum too who had been forced to eat their pocket bible page by page in a field, I became aware of something within myself.  When I listened to people, I had begun at some point to test their answers against my own created paradigm of "rightness."  The only time that paradigm fell away was when I heard a story, decided to trust someone or became curious.  With Susan, in some sense, she easily represented multiple perspectives.  It would not be easy straight away to put her into one category.  It was a little unsettling to realize how quickly, especially when fatigued, I learned to either/or another human being.  Day 1 and a small opening in my being began.
Posted by Rev. Robin at 6:23 PM